Supermarket Lingerie for Valentines Day? No thanks!

If you're a working mother like me and don't devote as much time as you would like to the man in your life, it's likely that you won't have time to go to Ann Summers every weekend and buy in supplies for your bedroom action.  The sad fact is that these days I can't afford to shop for whips and chains like I used to.

I am kidding.  I never bought whips and chains.  I was a sex toy tester.  I got them for free.

Anyway, at the moment romance is not high on my list of priorities and I want to change that.  It's February.  Spring is just around the corner and although it is cliche-ridden, I want to make the most of Valentine's Day this year.  So while I was at Tesco buying frozen veg I saw this cheeky little red number and thought, "Ooh, that's only six quid!  I bet hubby would love to see me in that," and I stuffed it in the trolley.

Yes.  Six quid.  I did a quick calculation of the pounds per wear and reckoned he wouldn't get fed up with it until I'd worn it half a dozen times and it was a definite bargain.

The garment itself is of reasonable quality.  It feels like satin and after washing is still like ribbons.  The colour is a lot less blue in reality than it looks in the picture but it does have the kind of metallic appearance you don't get in higher quality slips.

The top is trimmed with lace which can get a little scratchy, so it's not recommended for sleeping in, but if you're wearing it for titillation, it shouldn't bother you too much. 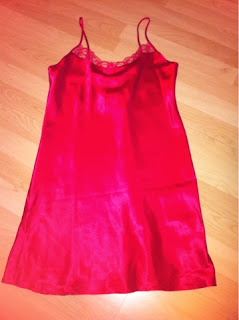 The one thing I didn't like about this item is that it is a bit shapeless around the bottom half.  Hubby didn't actually care but I did.  I have worked hard to get a skinny waist and I love wearing things that show off my waist to hip ratio (currently thirteen inches of a difference which is a huge amount for such a petite woman and I'm proud of it!) and I felt this didn't do me justice.  On the plus side, for the smaller chested women like myself this is a fabulous item as the lace trim draws attention to the top of your body and makes you look less pear shaped.

For all its advantages, I would still not recommend this item.  Why?  Well, it's supermarket lingerie and it's never going to be sexy, is it?  Not when the spotty youth at the checkout has had his mitts on it.  And when you're slipping into it, anticipating a night of passion with your beloved, you'll remember the awkward checkout smalltalk.  You know the kind.  He's scanning through your bulk buy baked beans and comments that it's a good offer then picks up the saucy red babydoll.  He opens his mouth to say something then thinks better of it.  You blush.  He looks you up and down, imagining you in it and you can tell from the look on his face that you're not his cup of tea.  He simply says, "Do you want the hanger with this?"  And as you stuff it in to the thin plastic bag along with your fish fingers, you just know you'll never feel like a goddess in it.