A to Z of Lingerie: B is for Balconette 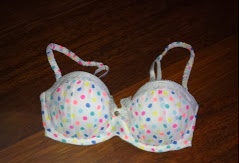 Today I am writing about balconette bras, which are actually my favourite.  I bought my first one when I was seventeen to try to entice the boy I had been seeing into taking off my top.  It turned out to have been a waste of money in that respect but I fell in love with the design.

So what is a balconette bra?  It's a bra that lifts the breasts and holds them up like a shelf.  In fact it's sometimes known as a shelf bra.  There's very little coverage, hence its appeal to the opposite sex.  The garment, if worn correctly and in the right size, should give the appearance of a horizontal line going across the bust.  It gives the appearance of being corseted but contrary to popular belief nothing should overflow from the bra if it is the correct fit.  However, we all know that wearing a size too small gives a more dramatic effect and as a more petite woman sometimes I go down a size to make me seem bigger.  It definitely works.

Why would anyone favour this design over others?  It's simple.  The fabric should sit low on your breasts giving very little coverage and is therefore ideal for wearing with low cut tops and dresses.  I find it's sometimes better to wear a balconette bra with removable straps (or clear straps) than a standard strapless bra because it gives a better appearance to the cleavage.

What's your favourite style of bra?  I'm curious to hear the opinions of both men and women.
Labels: a to z blogging challenge balconette bras lingerie
Reactions: